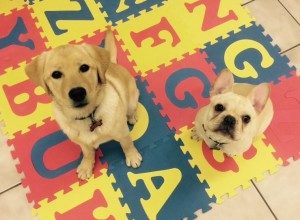 Did you know that the period of 7-16 weeks of age is crucial to your puppy’s proper development? Extensive socialization during this period may be the most important thing you can do for your puppy!

Dogs aren’t born loving and trusting people. They learn it. Most adult animals are naturally suspicious of anything unfamiliar. Young animals, however, have a period of openness and curiosity as they how their world works. During this “critical socialization window” puppies learn to accept the sites, sounds, and people in their environment. It’s critically important that they have a wide variety of safe positive experiences with people, sights, sounds, and environments during this time.

Why is it so important to socialize my puppy?

Poor socialization poses a huge threat to your dog’s well-being. Shelters report that behavior problems have become the number one cause of pet relinquishment. Thousands of families each year relinquish dogs to shelters due to behavior problems. Most of these problems could have been easily prevented by proper socialization and a bit of early training. Reasons to socialize include:

Give your puppy the widest possible variety of positive experiences. You want to teach him, “New is good. New won’t hurt me. I shouldn’t be scared of New.”

Socialization and problem prevention at home

Socializing a puppy also means teaching him to accept and even love things that aren’t necessarily natural for dogs to tolerate:

Our rescue dog had some serious behavior problems. We hesitated to use Training Tracks because we didn’t understand what clicker training was. We are so glad we did not let that stop us because we ended up loving the positive reinforcement approach and found it to be very effective. Mel and Jeff are not only great at training dogs but wonderful at helping the humans understand the reasons behind the technique so you can apply it at home and in unanticipated situations. Before going to Trai… END_OF_DOCUMENT_TOKEN_TO_BE_REPLACED

When we brought Weezer home from the shelter, he had an unfortunate habit of nipping hard enough to draw blood. This was unacceptable around my grandchildren (ages 8 months, and 4, 8 and 9 years). The nine year old lives with me, and the others visit frequently, so I called the shelter and made arrangements to return Weezer. However, I’d heard of good results with board and train, and decided to try that before giving up on Weezer. Training Tracks has been wonderful with him—no more bi… END_OF_DOCUMENT_TOKEN_TO_BE_REPLACED

As behavior consultants, Mel and Jeff Silverman have offered a service to this area that is invaluable. All new puppy examinations in my office include my suggestion that they attend puppy socialization classes. At my veterinary clinic we notice the puppies that have had this training because they are better balanced and are much more easily handled. They truly make better family members. I can be assured that those puppies that have enjoyed Mel and Jeff’s input will be much better appreci… END_OF_DOCUMENT_TOKEN_TO_BE_REPLACED

We are so glad we found Training Tracks when we got our Affenpinscher from the shelter. Mel worked to help her overcome her incredible shyness, and each month she comes around a little more. She now even jumps on the couch to cuddle up next to me! Thanks, Mel! You were fantastic.

We definitely appreciated your approach to things. You’re a really good communicator. You have a way of expressing concepts that makes the dog’s perspective easier to grasp. Quite honestly, you were the first trainer we talked with that we all felt we could follow, and we’re thrilled with the results.

Fantastic! I was referred to Training Tracks by my vet for aggression issues with my puppy. Jeff did in-home training sessions with our entire family to teach us how to minimize this behavior. He is extremely knowledgeable with positive-reinforcement training methods and my puppy responded very well. It was money well spent. I highly recommend Training Tracks!

My husband and I highly recommend Training Tracks! We initially met Jeff through a local animal shelter and then started in-home training sessions with our first dog for some behavioral problems. Both Jeff and Mel are incredible trainers and are very personable. Their positive-reinforcement approach is very rewarding for both the person and the dog. When we got our second dog we continued with basic training classes at the West Chester location and were very happy with those as well. I would rec… END_OF_DOCUMENT_TOKEN_TO_BE_REPLACED

Dear Fellow Veterinarians, I would like to recommend Training Tracks for use in your practice. I really do feel that their pet training abilities have been invaluable to my practice and to my clients. We started recommending them to our clients several years ago. We received impressive comments and results from our clients and patients. We now include their very helpful and informative handouts and brochures in our puppy folders. We have also worked very closely with them with problem do… END_OF_DOCUMENT_TOKEN_TO_BE_REPLACED

Mel Bussey and Jeff Silverman of Training Tracks Canine Learning Station provide the expertise that helps you understand why your canine companion does what he does. You will learn what motivates your dog to be well behaved and what motivates him to be not so well behaved. This applies to new puppies as well as older dogs with specific behavior issues. Through an organized methodology and positive reinforcement you will be given tools to encourage good behavior rather than just punishing bad b… END_OF_DOCUMENT_TOKEN_TO_BE_REPLACED

As a first time dog owner with a high-energy puppy, I had/have A LOT to learn – Mel has been an invaluable resource in getting both pup and owner on the right track! We did both private sessions and the Basic Obedience class and can’t wait to do another class in the future! Not only did we learn basic commands, but I was able to find a way to deal with my pup’s crazy energy that used to come out in lots of jumping/puppy nipping/attention-seeking as well as how to help teach him impulse-control (… END_OF_DOCUMENT_TOKEN_TO_BE_REPLACED

Scroll back to top